“We're going to go after it as hard as we possibly can,” Hogan told reporters Friday. “It's going to be a united effort. … This could be transformative, not just for Baltimore City, but the whole state of Maryland.”

The Republican governor said he would help any developer in the state who wanted to bid for the project, but that the waterfront Port Covington development was “the best of the sites that I've seen, and Baltimore City could really use the shot in the arm more than anywhere else.”

Amazon set off a national bidding war last week when it challenged public officials to propose why their city should be home to the company’s second national headquarters. Amazon gave a six-week deadline to apply and issued a wish list of amenities: access to a highway, high quality of life for future employees, a shovel-ready site with at least 100 acres, and a well-educated workforce, among them.

The 260-acre Port Covington project on a South Baltimore peninsula quickly emerged as perhaps the city’s most competitive option for luring the company here. Under Armourcurrently anchors the redevelopment project to convert an under-used industrial area to a $5.5 billion hub of homes and business.

Hogan promised to support an incentive package larger than either of the $20 million retention deals to keep hotelier Marriott International and aerospace giant Northrop Grumman headquartered in Maryland. He said the biggest state investment would come in the form of transportation projects.

“I’m grateful the governor saw fit to focus on the Baltimore region and the opportunity this is for us to bring additional jobs to the city,” she said.

The redevelopment of Port Covington has been under way for more than two years, and plans include new highway interchanges and a light-rail line. In 2016, Baltimore approved $660 million in public financing to build infrastructure at the site — the largest such deal in city history and among the biggest ever in the country.

Sagamore owns the building that houses The Baltimore Sun’s printing plant at Port Covington. The Sun has a long-term lease on that facility.

Earlier this week, investment bank Goldman Sachs announced it would pay $233 million to become a joint owner in the development of Port Covington, which is led by Under Armour CEO Kevin Plank’s Sagamore Development Co.

Hogan said he called Goldman Sachs CEO Lloyd Blankfein to thank him for the investment, and he met Friday morning with Sagamore executives. He said he was meeting Friday afternoon with Amazon representatives in Southeast Baltimore, where the company has a 1 million square foot distribution center.

Hogan’s spokesman Doug Mayer said he did not know whether a meeting between Bezos and Hogan had been scheduled.

Amazon did not respond to a request for comment.

Sagamore’s president, Marc Weller, said in a statement that Amazon would be “a significant economic boost” for the city.

“We couldn’t be more excited and appreciative of the governor’s support,” Weller said. “Port Covington is Maryland’s ideal location for Amazon’s HQ2, and we are looking forward to working hard with the state and city, as well as other Maryland partners and institutions, to bring these 50,000 Amazon jobs to Baltimore.”

Two other Maryland jurisdictions also expressed interest in competing for the headquarters, but one backed out Friday morning.

Baltimore County Executive Kevin Kamenetz had pitched several sites there when the competition was first announced. But in an op-ed published by The Baltimore Sun, he reversed course and urged the state to rally around the Port Covington project.

“We had some good choices in Baltimore County, but the more I thought about it, I realized this is a once-in-a-generation opportunity,” he said in an interview.

On Tuesday, the University of Maryland pitched College Park as the best spot for the program. University officials did not respond for a request for comment. 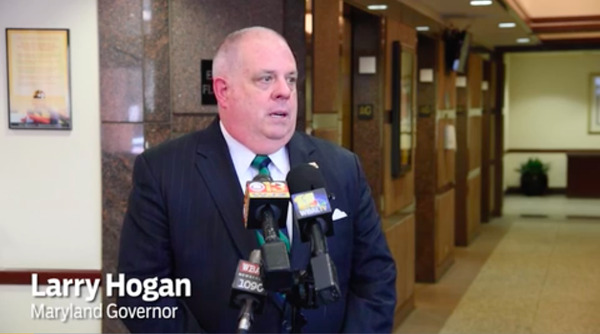